Fiction syndication, the simultaneous serial  publication of novels and stories in several  newspapers and magazines, usually arranged  by literary agencies, originated in France  early in the nineteenth century but was a late  development in both England and Americal  Despite some newspaper appearances of serialized novels (Harrison Ainsworth's Old  Saint Pauls first appeared in the Sunday  Times from January-December 1841), the  practice did not become common until the  late Victorian period with the expansion of  weeklies and dailies.  The pioneer in syndication in England was  the newspaper firm of William Tillotson and  Sons. ln 1868 they began to serialize novels in  their Bolton Weekly Journal, primarily as a  means to draw more subscribers. In 1873 they  inaugurated Tillotson's Fiction Bureau as an  agency to syndicate fiction in six provincial  newspapers, and soon extended their operation to newspapers throughout the country.  The first English novel syndicated in England  was Mary Elizabeth Braddon's Lucius Davoren. Braddon was followed by such popular  writers as Walter Besant, Rhoda Broughton,  Hall Caine, Marie Corelii, G. Maville Fenn,  H. Rider Haggard, and Ouida. Among “classic” writers, Thomas Hardy (see Tess of the d'Urbervilles) and Robert Louis  Stevenson first reached a wide readership  through their connection with the Tillotsons.

Sir – Your recent review of Mr R.L.Purdy’s bibliography of Thomas Hardy mentions the inclusion of a note “on that elusive organisation which frequently crops up in bibliography from Wilkie Collins to H.G.Wells, ‘Tillotson’s Fiction Bureau.’”

For two generations of newspaper men from the 1870s to the 1930s, there could have been nothing eliusive about that enterprise. It was one of the earliest examples in Britain of what would now be called a feature syndicate, acquiring the serial rights in various forms of literary work, fictional and non-fictional, for sale to newspapers at home and oversea, and having only a regional circulation, so that a number of publications could acquire the same work, each paying a fee proportionate to its area of circulation.

Frank Singleton has told the story of this remarkable organization in his centenary history of the firm, Tillotsons 1850-1950, in which he lists some of the celebrated novelists – from Miss Braddon and Thomas Hardy to Arnold Bennett and Conan Doyle – who wrote for Tillotsons. He mentions also that Sir Philip Gibbs served as fiction editor of the Bureau for a period ending in 1902.

The firm still continues to enjoy distinction ass newspaper proprietors and printers, but the Fiction Bureau was acquired in 1935 by the London syndicate, Newspaper Features Limited. 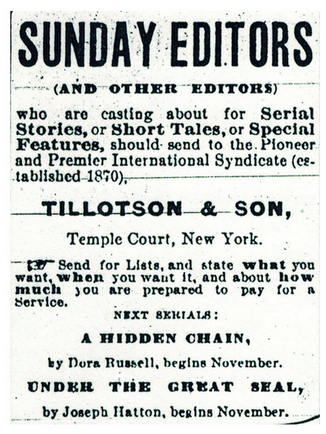 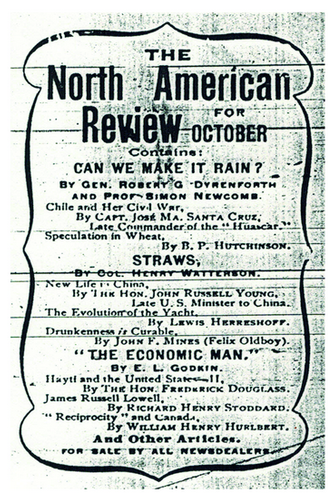