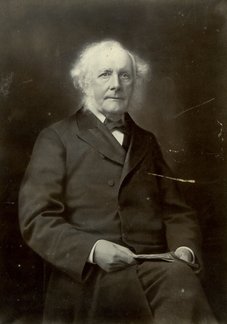 A BUST OF JAMES LEVER

A marble version of the present bust

is in the Lady Lever Art Gallery, Port

six bronze examples of the bust were

]ames Lever, son of ]ames Lever, counterpane manufactuer in Bolton, was born there in 1809. He was educated at Rivington Grammar School as the apprentice to ]ohn Brimelow, a Bolton grocer.

In 1831 he became manager of the new Manchester branch of Sheldon &  Sons in Swan Street. While working in Manchester he married Eliza Hesketh, daughter of a cotton mill manager. He returned to his native Bolton where he managed the retail grocery of Stones & Hesketh which he purchased in 1864 when it became

James Lever moved to Harwood Lodge, a substantial country house near Bolton, only leaving there in 1894 to Hesketh Grange, which had been built by his  son near the village of Thornton Hough. He died in 1897