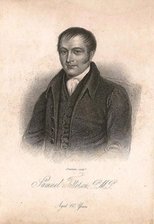 Samuel Tillotson was born at Holbeck, Leeds, on 13 August 1794 to parents John and Esther. He married Elizabeth Conyers (1794-1873) at St Peters, Leeds on 29 May 1815 and had eleven children. Samuel was first associated with the Wesleyans c.1817-1819 but then joined the Primitive Methodists who first began to meet in Leigh in a cottage off Kirkhall Lane. He began his ministries in the Malton Circuit in 1822 followed by Circuits in Pocklington, Ripon, Newcastle, Sunderland and Hexham before taking charge of Higher Bridge Street Primitive Methodist Church in Bolton in 1831. In 1834 he bought a plot of land on the south side of Bradshawgate in Leigh and built a chapel and school before moving to Keighley in 1837 and then various circuits in North Wales and the Midlands. He was eventually appointed Superintendent in Leeds in 1861. He died on 28th May 1863 in Leeds and is buried in Holbeck Cemetery, Leeds.

Excerpt from My Primitive Methodist Ancestors

Samuel was born at Holbeck, Leeds, on 13 August 1794 to parents John and Esther. Samuel was associated with the Wesleyans in the time period 1817-1819 as two children were baptised in the Wesleyan Chapel at Holbeck.

Primitive Methodists first began to meet in Leigh in a cottage off Kirkhall Lane, but in 1834 Samuel bought a plot of land on the south side of Bradshawgate and built a chapel and school.

On a preparation for the coming of the Lord: A sermon preached from the parable of the wise and foolish virgins: in the Primitive Methodist Chapel, Newcastle upon Tyne, on the 4th of Dec. 1825 , pub 1826